Blackrock Homes has been one of the Treasure Valley’s most steadfast, high-quality builders for over two decades. We were here during Idaho’s “best kept secret” years, and we continue to thrive as Idaho has gained national recognition (we love it here too). In fact, at Blackrock we like to say “we know Idaho, we helped build it.” But Idaho also built us. As our loyal Blackrock homeowners lives’ have progressed, we’ve evolved to continue building superior homes to meet their needs and dreams. As a builder, it can be hard to know if and when you’ve “made it.” And though some of our big goals remain on the horizon, today we want to pause and recognize some of our clients who have each found home in a Blackrock build more than once.

When Roy and Lorraine relocated to Boise, they were drawn to the beauty of Boise’s East Side. The close proximity to the Boise River and foothill t

rail systems were an immediate attraction, inspiring them to purchase a Blackrock home in Harris Ranch. After a period of time, they discovered that Blackrock was also building in Movado Village. This new gated community offered an enhanced low maintenance lifestyle and a series of single level homes that was created for community. These attributes appealed to Roy and Lorraine, and they soon transitioned from the East Side to Meridian. Having professional backgrounds in design, they both referenced their appreciation for the interior finishes of the homes, as well as the thoughtful layout of the neighborhood.

first attracted young professionals, Alexis and Torin, to the neighborhood. Being engineers, they recognized the quality of the construction and modern layouts that are surprisingly livable. Like millions of others, Alexis and Torin found themselves working from home during Covid’s onset, and later evolved to a more long-term work arrangement. As a result, each needed more space for uninterrupted time, and they eventually moved into the largest floor plan of the Urban Series, the Tucson.

It’s rare to come across a homeowner that has not only purchased two but three of your homes, yet that is the story

we’re about to share. Over the course of 11 years, Michele and her son Kevin have lived in Paramount, Solterra and currently Verado. Very active in community services for Meridian, this single mom raised her family in a larger two-story home in Paramount, and later scaled down to a smaller townhouse as less space was needed. When Blackrock introduced Verado, Michele and Kevin found a new home that fit their needs perfectly. Like their previous neighborhoods, Michele and Kevin have helped foster a spirit of kindness within their neighborhood block, always willing to lend a helping hand.

Mark and Gretchen were among the first wave of homeowners in Movado Village.

Originally, they were looking at Blackrock’s Tucson plan in the Urban Series, but were delighted by the Open Space layout and gray color scheme of the new Davos design. Plans changed overnight and Mark and Gretchen, soon became not only newlyweds, but new homeowners, too! Over the next few years, their household grew to include two adorable dogs and it was evident that a yard would give their lovable canines more space. So when phase 7 in Movado Greens opened, Mark and Gretchen returned to their original plan to move into a Tucson and were thrilled that the gray cabinets of their Davos model were now being offered in the Urban Series, combining the best of both for this happy family.

As an onsite agent, I’m very grateful for the opportunity to meet these extraordinary homeowners and learn more about their decisions to be repeat clients of Blackrock Homes. As a builder representative, I’m honored to be a part of a team dedicated to building homes of integrity and lasting value. We welcome the opportunity to share our story in person and see if a Blackrock home is the right fit for you!

About the Home Builder

Blackrock Homes is based in Meridian, Idaho, and has been a top residential builder in Boise Valley for over two decades. They have a long-standing reputation for building quality homes of excellent value and delivering superior customer service. 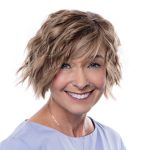 Real estate drew Angie in ten years ago, when she decided to make a career shift that would bring new and exciting challenges each day. Though the industry is ever-changing, Angie strives to deliver a high level of customer care and takes pride in making real estate transactions a positive experience. You can contact Angie at 208.250.2774 or angied@blackrockhomes.com.

Angie is a community specialist at Edington and Movado, and is licensed under Fathom Realty in Eagle, Idaho.